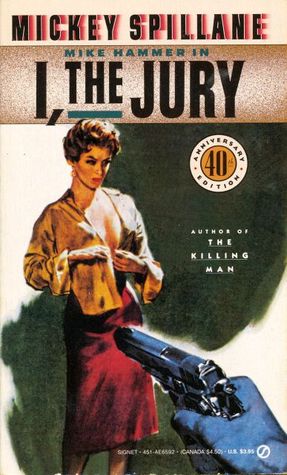 Mickey Spillane was indeed a master of his craft. I’ve read other renown authors from the noir / hard-boiled genre, but there’s something that just comes across as more visceral and hard hitting about Spillane’s writing. There’s nothing pretentious about his style but there’s an unspoken wisdom behind his words. I may have read Spillane a long time ago, but it’s one of those things where if you approach something later in life it leaves an entirely different impression on you.

While it’s not that hard to figure out who may have killed Mike Hammer’s friend Jack, it’s really Mike Hammer’s single-mindedness and his flawed yet likeable persona that draws us in. By exploring Hammer’s psyche and motivation through the 1st person narrative, Spillane gets a reader to not only understand him but also to sympathize and even perhaps condone his callous attitude towards life at least in part.

Originally released in 1947, this is a book that is authentically of its time in terms of some out dated attitudes(which is to be expected) but it’s also very easy for a reader to put himself in that setting and feel as if he’s right there in the room with Hammer. This book is a classic in every sense of the word. It’s almost a master class in hardboiled / noir writing, and it’s a book that I’d be happy to return to and re-read at some point. Spillane introduced us to the gritty world of Mike Hammer and his sassy assistant Velda in this debut novel and the result is one that will definitely strike a nerve. It feels like these characters are still alive today as you read this book.

Both the prose and the dialogue are so top rate throughout.  There’s plenty revealed about the nature of Hammer as well as the characters he finds himself dealing with. There’s just something about exchanges like this that just makes the writing come alive to the point that you feel you could almost sink your teeth into their thoughts and words.  When describing Charolette, a psychiatrist who had attended the party Jack gave before his demise, Hammer says:

“Her breasts were laughing things that were firmly in place, although I could see no strap marks of a restraining bra. Her legs were encased in sheer nylons and set in high heels, making her almost as tall as I was. Beautiful legs. They were strong looking, shapely…. “

Soon after we get to some very provactive dialogue:

I grinned at her. ‘You remind me of something.’

‘A way of torturing a guy.’

‘No, not quite. But if you take a guy that hasn’t seen a woman in five years, let’s say, and chain him to a wall and let you walk past him the way you did just now – well, that would be torture. See what I’m getting at.”

Many writers have since tried to emulate Spillane’s prose and dialogue to varying degrees of success, but there’s just something that comes across as so authentic, raw, and pure here that it’s easy to lose yourself in the narrative.  To some readers what comes across may be nothing more than a macho fantasy, but for someone who enjoys the genre and all its elements its like reading poetry.  The book trascends the revenge angle that remains at the forefront of the plot and becomes a poignant character study of a flawed man, his desires, and the way he perceives the world around him and the people occupying that world.

The world Hammer occupies is a cold and vicious one.  It’s a gritty urban landscape where characters either survive or don’t survive and it’s a world that doesn’t stop and grieve for those who don’t.  Mike Hammer sees himself as the ultimate purveyor of justice.  As hinted from the title, he’s driven to dole out justice his way as judge, jurror, and executioner of cold-blooded killers.  It never occurs to him that he may indeed be making himself into the very kind of killer he wants to hunt down.  There are friendships such as the one he has with Pat Chambers, the lead police detective who uncharacteristically decides to share information with Mike Hammer despite Mike being a Private Detective.  He also has his loyal assistant Velda who not only works for im and has a crush on him, she also understands him and accepts him for who he is probably more than anyone else Mike Hammer knows. There are desirable women who he must either submit to or resist depending on the circumstances, and there are victims who he may or may not be in a position to protect from a vicious killer.

In way, it’s refreshing to read something so honest and compelling, which stands in contrast to the way most of these kinds of characters are made to function today.  Today, we impart our heroes with tortured souls.  Once they’ve crossed a certain line, they have consciences that dragged them down and make our heroes question their own methods and even their own identities.  Take Christopher Nolan’s Batman Trilogy for instance.  In each film, the character feels a progressing burden of having to carry out the very justice that initially inspired him. Our heroes today like to dwell in the existential consequences of their very existence as heroes and purveyors of justice.  In contrast, Mike Hammer of this novel exists in a time when such meadering philosphical melancholy isn’t only uncharacteristic, it’s nonexistent.  Mike Hammer remains secure in who he is and never questions the nature of how he doles out his brand of justice.  He just does it and he does it stubbornly and unapologetically.

The ending will hit you like a ton a bricks not because of who turns out to be the killer but because of the way Hammer tells it. The interplay between dialogue and Spillane’s descriptions in those final moments will leave an indelible mark on a reader. It’s a remarkable dance that engages the reader via Spillane’s stark but elegant language. I highly recommend getting to know Mike Hammer, a shamus for the ages.